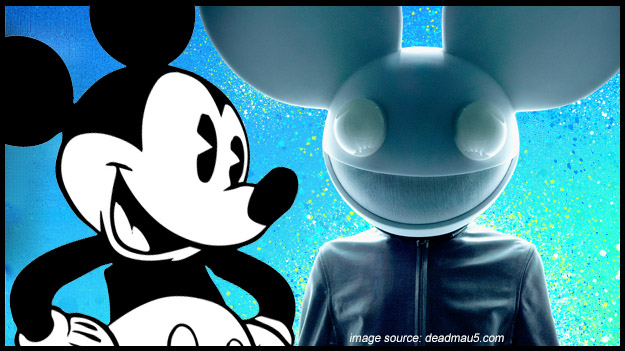 Canadian music producer and performer Joel Zimmerman is better known by his stage name deadmau5 (pronounced “dead mouse”). His music has been included in video games such as Grand Theft Auto, Saints Row, Need for Speed, GoldenEye 007, Wipeout 2048, The Sims 3 and Asphalt 8. Claims suggest that when Joel was in his early teens, he found a dead mouse in his burnt out computer and became known as the “dead mouse guy” among friends. He tried to use the name “Deadmouse” in an online chat room, but it was too long so he shortened it to “deadmau5“. He then created the logo called “mau5head” and in 2002 he created the website deadmau5.com and began uploading songs to SectionZ.

The deadmau5 logo appears in many different colors and designs, and has been shown on the cover of most of Joel‘s albums. He was given the idea to wear a headdress based on the logo by one of his friends and now Fans often attend Deadmau5 concerts sporting their own copy of the mau5head. The mau5head, as it is called, is already patented in over 30 countries, but Disney took legal action after Zimmerman filed for a U.S. trademark. Disney claims Deadmau5’s logo is too similar to the famous Mickey Mouse, and officially filed its opposition in September 2014 to block the trademark application in the US, which Joel applied for in 2013. The Deadmau5 trademark would cover classes of products from toys to BMX bikes.

In yet another twist, deadmau5 have hit Disney with a cease-and-desist notice for using his iconic track Ghosts ’n’ Stuff without his permission, according to a series of tweets from the artist himself.