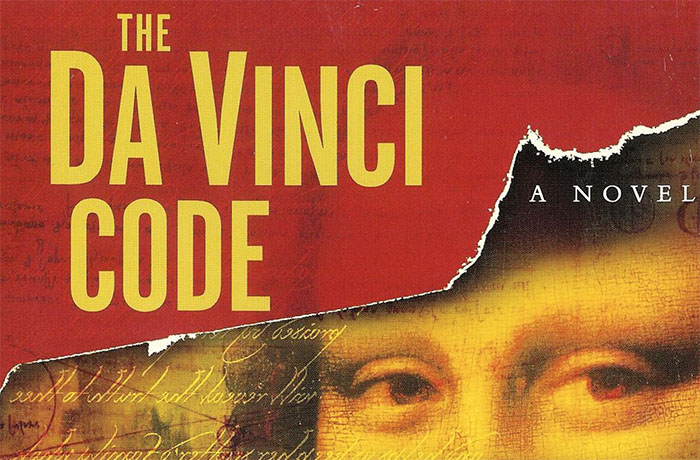 The Da Vinci Code is a 2003 novel written by Dan Brown. The title of the novel refers to, among other things, the fact that a murder victim is found in the Grand Gallery of the Louvre, naked and posed like Leonardo da Vinci’s famous drawing, the Vitruvian Man, with a cryptic message written beside his body and a pentacle drawn on his chest in his own blood.

The novel is part of the exploration of alternative religious history. The central plot point is that the Merovingian kings of France were descendants from the bloodline of Jesus Christ and Mary Magdalene. The novel became a worldwide bestseller that sold 80 million copies as of 2009. In 2006 Columbia Pictures released a film adaptation of The Da Vinci Code.

August 2005 – Author Lewis Perdue accused Dan Brown of plagiarism from his two novels, The Da Vinci Legacy and Daughter of God. He sought to block distribution of the book and film. Judge George Daniels of the US District Court in New York ruled against Lewis Perdue. April 2006 – DanBrown won a copyright infringement case brought by authors Michael Baigent and Richard Leigh, who claimed that he stole ideas from their 1982 book Holy Blood Holy Grail for his 2003 novel The Da Vinci Code. Mr Justice Peter Smith found in Brown’s favor.

Russian scientist and art historian Mikhail Anikin accused Dan Brown of stealing the title “The Da Vinci Code” from him. March  2007 – Random House publishers won an appeal copyright infringement case. The Court of Appeal of England and Wales rejected the efforts from Baigent and Leigh, who became liable for paying legal expenses of nearly $6 million USD.